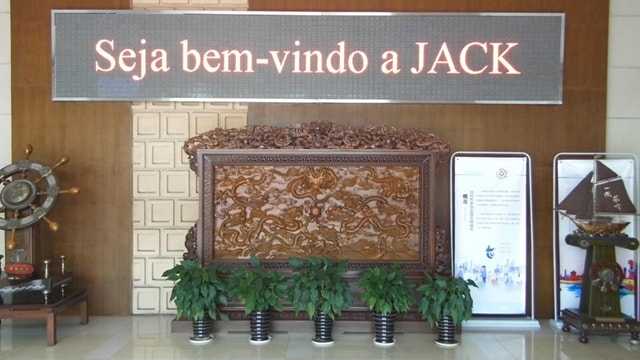 In 1995, when Feiqiu Sewing Machines came into existence in China, nobody thought it will become one of the most prominent sewing machine brands across the globe with such a common name like ‘Jack’. The Chinese manufacturer has traversed a long journey to prove the ‘Chinese Quality’, a positive term for the sewing industry. Jack acquired cutting technology giant Bullmer in 2009 to supplement its product portfolio and, since then, it has not looked back. Just to keep itself above all other brands, Jack has undergone major changes in recent times. The machine designs have been changed as the company feels Juki as well as many other Chinese small-level brands such as Jak, Jac and Jaki look similar to the previous models of Jack. Additionally, the auto bobbin changer is something that Jack has already installed in its A5 SNLS machine which has been launched recently. These developments indicate a bright future for Jack. Team StitchWorld had a candid face-to-face conversation with Vincent Guo, Director of Jack Group and GM of Jack Sewing Machine Co. Ltd. and found out some interesting facts about the sewing pioneer.

SW: Why did you choose JACK as a name which is very offbeat?

Vincent: There is an interesting and at the same time very thoughtful story behind naming our sewing machines as ‘JACK’. Around the year 2000, the iconic movie named ‘Titanic’ was released and ‘JACK’ was its main character. It triggered our mind that ‘Jack’ would be an easy name for people to remember as they were emotionally connected with that character. Additionally, we wanted to expand outside China. So, we switched from the original Chinese name to ‘Jack’ with a goal to capture the international demand for sewing machines. In the first 7 years or so, we failed many times, sometimes due to quality issues, sometimes due to lack of investment but we saw positive growth after 2005. We achieved all this with our hard work, believing in our products and their innovative features. 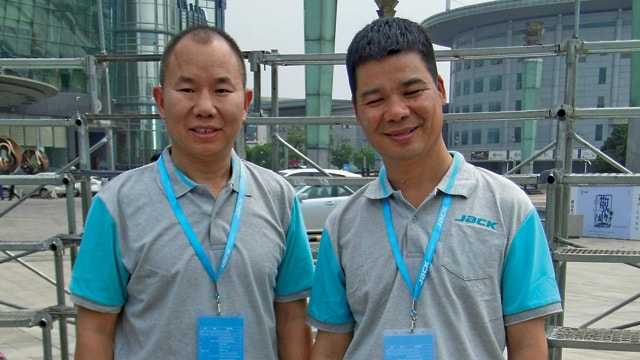 SW: What is the USP of Jack sewing machines? How are you trying to position Jack against the Japanese brands or German brands or even Chinese Brands?

Vincent: Today Jack has an unbeatable sales network all over the world. In the year 2000, we became the first company in the market with our standardization. All of our machines have predefined manufacturing and design standards and we follow them rigorously, and even ask our dealer to put equal efforts in their respective markets. Also, we have improved our quality step by step. This is the reason dealers and agents selling Jack have seen profit margins higher than any other brands. This scenario is not just for China market only, but is happening across the world, especially in India and Bangladesh.

We have even improved our existing technology every time when we launched a new machine. In Indian market, we sell energy-saving machines and we were the first ones to do so. We were also the first company to remove clutch motors and introduced the concept of direct-drive machine with no belt in it which made these machines more sustainable and energy-efficient. We saved a lot of material (Iron) in our machines and made them lighter in weight. With these results, even in the Chinese domestic market, our sales is now three times greater than Juki. Our sales is almost the same in India and Bangladesh. Our sales might be little less than Juki but our growth rate is higher than them. Our target for 2018 is to equal the sales amount of Juki and by 2019, we want to beat this Japanese brand. This is our challenge.

In order to achieve these targets, we are more focused on strengthening the R&D department to research on new products. We had 400 people in this division till last year. This year, we have a strength of 600 people that has made our R&D a strong department. And this is why we have more patented technologies than even Juki, Pegasus, Brother and other Chinese brands put together. Our future is to bring in more intelligent sewing products and software solutions.

Moreover, we are dedicated to expansion in the Asian market. We have a clear strategy to keep ourselves refrained from buyers whose mindset goes for ‘high-level’ established brands as well as those who want low-price machines, but no quality. Except these two customers, Jack is targeting all the customers.

SW: How will you convince/attract new customers? What is your promotion strategy?

Vincent: We spend enormous amount of time to create a promotional strategy. We already have a good understanding of India and Bangladesh markets. Since these markets do not have language issues, it is very easy for us to regularly organize dealer meetings in these countries to find new ways of growth. We also organize road shows by involving our agents. We even organize technical trainings.

We are actually catering to these markets through ‘Stability + Sewing Performance + Leading Technology’ combination. ‘Stability’ means there is no leakage, no stitch skip and no thread breakage in our machines, ‘sewing performance’ means our machines can sew heavier materials easily and we are achieving these using our latest innovations and patented technologies. We even focus on quality standard, stability and technical functions apart from launching our own offline stores in India, Bangladesh, Vietnam and other parts of the world in order to grow even faster than before. 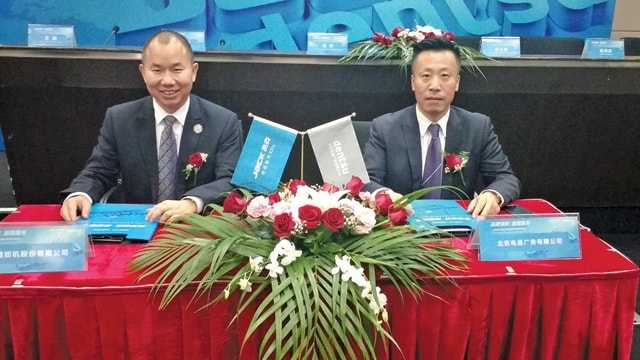 Vincent: The trend is moving rapidly towards IoT concept. So going with the trend, we are focusing more on IoT technology in future as we are already into automation and energy saving concepts. Our power saving machines share 66 per cent of total sales in 2017 as compared to 13 per cent in 2013. So we are achieving new heights.

If I talk about IoT, I must say that it is one of the revolutionary concepts that the garment industry has ever witnessed. It needs a software to connect an entire line of machines and through this, we not only control the machines but also the intelligent data. We have one high technology solution IPMS (Intelligent Production Management System) which was developed by our collaboration with Üchat. This can also be connected with RFID, app and web. IPMS is a one-stop solution for garment style management, production line balance, quality management, data analysis, pieces counting, equipment management, real time tracking of orders and process management. This is our effort towards Industry 4.0 concept.

SW: Tell us something about the new features including the voice feature which senses the reason of breakdown. What about adopting the auto-bobbin-changer technology in sewing automats?

Vincent: For intelligent solutions, internal voice communication is the most important part to make it easy for the operator to understand how to operate the machines. Being the first speaking machine in the world, A4 (SNLS) is the one which witnessed this voice feature. The incorporated voice sensors can sense any of the minor breakdowns and alert the operator about technical glitch. This way, the downtime can be reduced and production can be improved. Right now, we have installed 8 languages in the machines. A4 model is the first-gen sewing machine followed by A5, A6, and A7. Our second-gen products will be more upgraded as far as features are concerned.

Our A5 model can be termed as ‘the first thread cleanness’ machine in the world which has patented features such as digital alert system for oil leakage, bird nest prevention system and coaxial driving unit. Whereas, A6F model has 300 mm operational length of the bed that makes stitching even easier. This machine comes equipped with an auto bobbin winder, hand wheel with cooling fan and auto presser foot lifter which make the machine an advanced one.

Moreover, we are soon launching A7 model of SNLS machine which is actually designed and manufactured on the basis of our ISU (Intelligent Sewing Unit) production system. The machine will have four different feeding tracks and it will automatically test the fabric thickness to adjust the presser foot and accordingly, the feed dog.

Not just SNLS, we are equally growing our overlock machine categories too. The latest offering is the C6 model which is a fully automatic high speed overlock machine. Its 5 thru-shaft design helps in reducing the torque level to 0.2 Nm and keeps the machine stable while performing an overlock operation. Despite all these transformations and investment, our prices have not gone up, quality has improved and we are still cheaper than most of the competitors. This is the best advantage an end-customer can have by using our machines.

SW: The company also has spreading machines, automatic cutting machines and now you have acquired Italian shirt automation machines too. However, only sewing machines are sold under Jack brand. Why?

Vincent: We have our own principle as far as the use of the brand name is concerned. If we sell different products with Jack’s brand name, it would be difficult for people to remember the actual product of Jack which has a good market and is very well-known. The brands which we have acquired like IPMS, Bullmer cutters and MAICA sewing machines, are also established names in the market and we wish to capitalize on their name and fame. We are also of the view that a single name for multiple types of products will fade away our domination in the sewing division.

SW: What is the percentage of turnover that ‘Jack’ as a brand shares in the overall group turnover and how is Jack moving in its sales? What are your future plans?

Vincent: We currently stand at USD 200 million turnover. Mainly, our share is from sewing machines which have 70% share in the overall turnover. If I talk about country-wise share, we have great market in Bangladesh as among all Chinese brands in the country, we have captured 60% of the market. Whereas, in India, we have 62% market share.

In the first half of 2017 (January to June period), Jack has increased its sales by 69%, 41%, 29%, 47% and 11% on Y-o-Y basis in China, Vietnam, Bangladesh, India and Indonesia, respectively. The growth is overwhelming as we have beaten Juki in this period which saw minor growth in China and Vietnam by 4% and 10%, respectively. On the other hand, it fell drastically by 30% and 39% in Bangladesh and Indonesia, respectively. In India, it neither grew nor declined. We sold 60,000 power-saving lockstitch machines during the period in India and grabbed the first position from Juki.

Our future plans include 35% increase in sales by the end of 2017 and by 2018, we want to grow by 45%. For 2019, we have set up a target of 35% growth over 2018. Also, we are opening 8 service centres in south-east Asia in the current year. Next year, we will open 3 offices in India. We are supporting our agents with USD 10 million help for branding and marketing our products. Furthermore, we have signed a contract with international marketing and branding strategic firm Dentsu in order to expand on a bigger level in the international market.

We aim to capture mid/high-end customers, mid/low-end customers and garment customization companies for Bullmer spreaders and cutters. As per our projection, the sales of Bullmer cutting machines will increase by 180% and spreading machines by 350% till 2020.

Innovation(s) in These Disrupt...