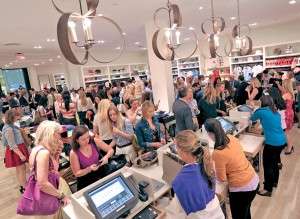 While the last few decades belonged to the Baby Boomers, the focus now has shifted to Generation Y, Echo-Boomers or Millennials as they are rightly called, as the new age consumers accounting for almost 86 million people in the US alone between the age group of 13-33. These free spending consumers are changing the retail scenario as brands in a quest to attract them are rolling out various marketing strategies. Retailers are well-aware that the time is right to target millennials and convert them to brand loyalists at a young age so that they are able to maintain these consumers for life.

Highly educated and globally connected, the millennials know what they want and can easily navigate the barrage of information online, constituting a huge demographic with enormous buying power. These consumers are crucial for the apparel industry as they will be a potent force by 2020 when their annual spending in the United States alone will grow to US $ 1.4 trillion annually representing about 30 per cent of the total retail sales. No wonder retailers are trying to reach out to them and find out what interests this fickle-minded consumer base. Not restricted to the US alone, one can find them in various other countries such as China, Brazil, Russia, India, etc. as they are spending billions, influencing even more expenditure.

According to Pew Research, a non-partisan fact tank, this generation has been defined as, “confident, self-expressive, liberal, upbeat and open to change.” Many brands including Rue 21, Hot Topic, Forever 21, American Eagle Outfitters, Abercrombie & Fitch, ZARA, H&M, Aeropostale, Target, Gap, Nordstrom, Hugo Boss, Versace, etc. are aggressively targeting the millennials and a number of retailers are increasingly focusing on marketing campaigns to draw these consumers towards their brands. But to convert millennials into long-term followers requires more than the traditional marketing tactics or a freebie, as they mainly rely on peer recommendations and social media content to make purchases through smartphones and tablets.

To cater to these tech-savvy consumers, various brands have used a number of approaches such as hiring younger designers, creating digital content, connecting to brand enthusiasts via social media and launching new product lines keeping in mind the ‘taste and temperament’ of millennials. Many brands and retailers, however small or large are beginning to engage and interact with customers in ways unlike ever before. Since the 1960’s retailers who had focussed on connecting with baby boomers, the largest demographic responsible for more than half of consumer spending, are shifting towards the new age millennials as the baby boomers generation seems to have matured and settled into a regular and conventional buying pattern with no amount of marketing tricks deviating them from their brand/retailer loyalty.

[bleft] Some facts about Millennials

According to the Bloomberg Businessweek data, millennials between the age 25-33 spend 8 per cent more on apparel than those between the ages of 35-44, though they earn 22 per cent less.

Millennials are 7 per cent larger than the baby boomers generation.

Nielsen estimates that 74 per cent of young adults between the ages of 24-33 own smartphones, which is up from 59 per cent in mid 2011.

Millennials are three times larger than the Generation X, and by 2030 they would outnumber the non millennials.

Millennial generation will reach their late 30s in 2020 and overtake baby boomers in numbers and spending power.

Amongst the brands shifting focus from baby boomers to millennials is Gap, who has been associated with baby boomers since its launch in 1969, but now is reshaping its image as its average customer is at the age of 39. Consequently, the brand is increasingly looking at becoming relevant to its younger buyers. As Seth Farbman, Chief Marketing Officer, Gap Inc. rightly puts it, “A 39-year-old customer, while still valuable, was not going to deliver the growth we needed to meet all of our objectives. The millennial generation is one of the most connected, most powerful in terms of buying ability and buying power, and one of the most optimistic generations we’ve seen, well, since 1969 when Gap was started.” Now, Gap’s goal is not only restricted to attracting the younger generation but also to get the average Gap customer thinking younger.

Macy’s is also actively targeting the millennial consumers as the retailer is vigorously expanding its activewear for women over the next year. Brands such as Nike, the North Face, Under Armour, Calvin Klein Performance and its private label Ideology which are currently being carried out in a smaller way in Macy’s will be rolled out to a larger number of stores. Helly Hansen, an upmarket outdoor brand, will be added in select locations too. “Our customer insights show that our millennial customers have a signiﬁcant crossover in shopping activewear, so we believe that satisfying his and her total lifestyle must involve more fashion and function in our active offerings. We are working with the best brands in the category to bring our customers exciting merchandise that will serve their athletic interests in all endeavours – from the yoga studio to the weight room, to hiking and rock climbing,” informs Jeff Gennette, Chief Merchandising Ofﬁcer, Macy’s Inc.

Lately, luxury brands are also reinventing their image for a younger generation of shoppers. Italian fashion house Versace is targeting a new consumer with the launch of its Versus Versace website, while using the social media platform to spread the word. Versus promoted the launch through its Facebook page while posting links through its Facebook and Twitter to help direct Versace followers to the new line. The launch of this rebranded collection aims at converting young consumers into brand enthusiasts at an early age. Also, fashion designer Jason Wu has been appointed as the new artistic designer of Hugo Boss womenswear in order to revamp the brand and reach a new customer base. In fact, many luxury fashion houses are appointing new designers or rebranding themselves to remain widely relevant to young shoppers. In addition, widely known designer Alexander Wang was appointed as the Creative Director at Balenciaga rousing up the brands reputation.

Commonly, retailers are going the YouTube way as digital campaigns are turning out to be the best way to grab the attention of a millennial consumer, by complementing mobile and online channels. Recently Target, an American retailer, live-streamed five YouTube personalities including gamer Brooke “Dodger” Leigh and actor-musician Chester See living in cube like dorm rooms, outfitted in products sold by the retailer. Also retailer Nordstrom launched a campaign promoting the concept of ‘Youphoria’ that included young adults involved in various outdoor activities dressed in Nordstrom gear. The retailer through the videos sends the message that everyone can buy affordable style which fits their character at Nordstrom. All these videos are available on YouTube and have been rigorously promoted by the retailer via Twitter, Facebook and the Nordstrom website.

Retailers growing need to cater to the Millennials

A millennial life goes 24/7 as they have never known a world without computers or the internet. Doing things like offering free Wi-Fi in stores, mobile checkout, free delivery and social media sharing are a few ways through which retailers can begin to attract this new consumer group. This ultramobile and ultradigital generation wants a seamless shopping experience which is more convenient, faster and memorable. Being seen as the ‘future of retail’ this generation is redefining engagement models of various brands as they master internet, social media and mobile platforms.

Manage your buyer by managing ...