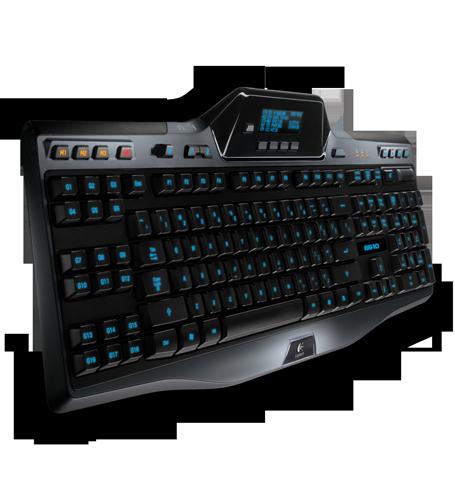 Gaming keyboards come in all shapes, sizes, costs, and utilities. The multi-functional Z-board, with its game-specific overlays has had some attention over the years, as well as the Saitek Eclipse range, and Logitech’s own G-series keyboards.

The original G15 in the range offered a flip-up black-and-white LCD display, programmable G-buttons, a physical switch to turn the Windows key off, and on-board media controls. The G11 then offered everything the G15 did, without the display. The G15 revision 2 integrated the screen into the keyboard, and reduced the number of G-buttons. The G19 then became an LCD color version of the newer G15, with some other small enhancements.

The G510 then offers a mix of the newer G19 and the original G15, giving a color display and more programmable buttons. Alongside this, the keyboard also offers 3.5mm analog headset jack inputs, converting the signal to USB and sending it down the keyboard USB cable. All the familiar G-series features still remain – media controls, programmable buttons, USB inputs, and color backlighting. The G110 keeps the gauntlet running, as a non-LCD version of the G510.

As one of the first G15 adopters when they were first released, I can confirm that it is still going strong, even if it does pick up mountains of dirt and dust, after thousands of hours of high-impact gaming. Back then, I paid £55 ($85) for the US import version. Logitech are selling the G510 from their website for $119.99, or £89. Again, paying $120 for a keyboard can seem excessive, especially when a $10 keyboard will do what a keyboard was originally designed to do. Most users however, and especially gamers, will find use for all the extra features that boards such as the Logitech G-seies offers.

Black AirPods: do they exist and...